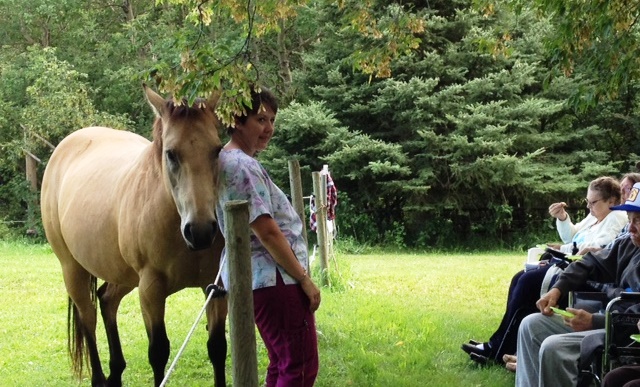 “Once I knew only darkness and stillness… my life was without past or future… but a little word from the fingers of another fell into my hand that clutched at emptiness, and my heart leaped to the rapture of living.”

Based on a recent research study conducted by the University of Saskatchewan, University of Regina, the Youth Solvent Addiction Committee, the White Buffalo Youth Inhalant Treatment Centre, and the Cartier Equine Learning Centre, Canada is an international leader in providing residential treatment to First Nations youth who abuse solvents.

The White Buffalo Youth Inhalant Treatment Centre expanded its programming in September 2005 to include Equine Assisted Learning (EAL), partnered with the Cartier Equine Learning Centre. Located north of Prince Albert, Saskatchewan, the Cartier Equine Learning Centre is noted as a leader in establishing industry standards in the area of EAL certification and program development.

The study explains that for some First Nations, the horse has historically been viewed with a profound sacredness, just as there is sacredness believed to be in all living things. The horse specifically is identified as having a strong spiritual power. The horse is seen to be a “teller of truth” and desires to do the “right thing.” Hence, it is believed that the Horse as Healer will lead individuals in the “right direction.” A horse’s spirit is believed to be able to assist others in understanding their place in the circle of life”.

While compiling this research, an Elder at White Buffalo shared a story that speaks to the important ceremonial role of the horse to First Nations. As he tells it, when he was a child during World War II, his home community organized a giveaway and powwow for the men and women who were serving in the military. Community members gathered to perform a traditional welcoming ceremony, and the ceremonial animals were guided in. A typically slow and lethargic mare was one of the ceremonial horses, and as she entered the arena, on her own volition she stood on her hind quarters and circled it sideways in a ceremonial horse dance. She became animated, it was said, in response to the intent and spirit of the ceremony. This is one story that illustrates not only the horse’s sacredness and connection to ceremonial activities for First Nations, but also its intuitive nature.

Although the following story is fiction, as an Equine-Assisted Learning Facilitator at Ravenheart Farms near Humboldt, SK, I bear witness to similar stories with clients, and the many stories that are played out daily in treatment centre’s, therapy programs, and in the countless and growing number of practices around the world, where horses are transforming lives and opening hearts.

Sara sits in the circle during a group therapy session at a recovery centre. This is Day 4. Her arms are tightly crossed against her chest, her head is down, she isn’t interested in participating and her anger is palpable. Broken and scarred from battling her short lifetime of substance abuse, addiction and a life on the streets since the age of 9, Sara has somehow found her way to this circle, this centre, this way into the light.

The facilitator encourages Sara to share. She responds with an angry outburst, swearing, shouting and calling insults to the group. Glancing around the circle, Sara watches for the reaction. It comes and is familiar to her. The majority of the group ignores her, some smile politely, or shuffle their feet and pull inwards, and an older tough-looking girl shouts back aggressively, but most skillfully mask their reaction. This is nothing new to Sara. She has been here, done that, many times in her life, with tougher gals than she, and if she had such a thing as her own closet…the t-shirts would be hung there.

Day 5 arrives, and Sara is desperate now. Hurt, angry, lost and alone, and without the numbing effects of chemical substances, her emotional pain is unbearable. As if this discomfort wasn’t enough, the group is standing out in the biting wind of a Saskatchewan fall morning with a bunch of horses! With the group standing inside the round enclosure, a black horse is lead into the circle. Snorting and anxious, with its head held high, it prances nervously around the middle of the circle. The facilitator asks everyone to be still and breathe. Abruptly the horse stops and stands in front of the tough girl from yesterday’s session. The facilitator explains that as prey animals, horses quickly recognize aggressors. The horse stares intently at the girl, nostrils flaring, ears flicking back and forth, and tail swishing vigorously. “Breathe”, says the facilitator. “Step back and breathe deep into your belly”. As the girl complies, the black horse drops his head, blows gently and moves on.

For Sara, a distant memory has been triggered. At home, prior to her parents divorce when she was 9 years old, they had horses on their family farm. Big, gentle work horses. Escaping the tension and anger at home, Sara would spend hours in the pasture with these gentle giants. They would come close and nuzzle her, carefully moving around her as she sat in the grass. Their gentle eyes and quiet munching were soothing and comforting. In the circle now, Sara’s stomach clenches at the memory of her Dad, who was always angry and impatient, and his rough treatment of these gentle beasts. Sara and her mother also knew the weight of his hand.

More relaxed now, the black horse continues to trot around the circle. As he passes Sara, she reaches out to touch him. He moves 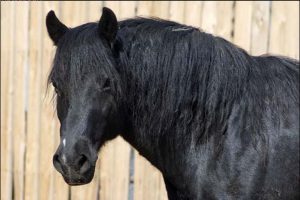 away. She continues to try and touch him, but he is wary and aloof. Sara knows this feeling too. During the de-briefing session, she is quiet and withdrawn, but intrigued now by the stories she is hearing from the others in the group. The tough gal talks about how she can relate to the horse, always able to spot the “dangerous” ones, and move in on them in self preservation before they could harm her, always alert, defensive and wary.

Day 6. The day is sunny and warm. Sara’s session today is a private one. No audience, just the human and equine facilitators. The human facilitator asks Sara to enter the round pen, where four horses are quietly standing together. They lift their heads and watch as Sara enters the ring. A graceful, bright-eyed yellow mare approaches and softly nuzzles Sara’s face. The others slowly move towards her, and suddenly she is surrounded by soft noses and gentle eyes. Tears roll down her face as she feels her heart open with tenderness. Memories of twin baby girls, birthed by Sara in her early teens and taken from her during the chaos of addiction and life on the streets, now surface gently in her mind. “They’ve come back to me she say’s softly, I can feel my babies are here”.

Horses don’t mask their feelings, smile when they are frightened, or care if you are a drug addict living on the streets. They only recognize where you are in the moment. The presence of horses can bring deeper connection, recognition of inner spirit, and meaning to life’s significant spiritual journeys. For someone like Sara, profound transformation and healing can transpire in a single moment of heart opening connection. 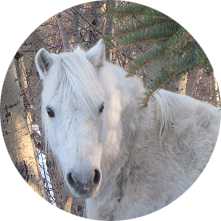